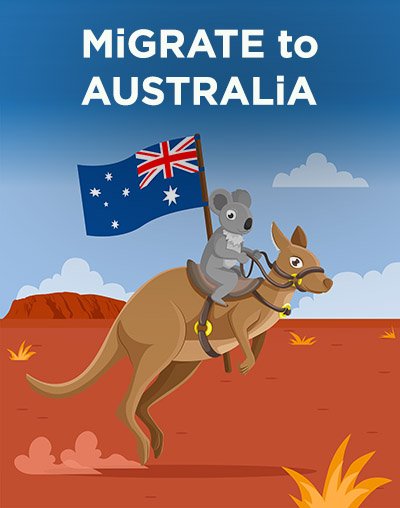 Migrate to Australia - a whole continent awaits you

Australia is the world’s sixth-largest country, with about 25 million inhabitants spread over a massive landmass of 3 million square miles. Home to beaches and deserts, kangaroos, the Outback, the Sydney Opera House, and the historic Melbourne Cricket Ground, the land Down Under offers its residents a charming mix of natural beauty and a cosmopolitan living environment. As one of the world’s most urbanized and multicultural countries, Australia offers potential expats an excellent life quality.

Dutch explorers first landed in Australia in 1606, and the British began to settle there in 1788. Many settlers were criminals sent to live in Australia as punishment. For a short time, the newcomers lived peacefully with the Aboriginal people. But soon, fighting broke out over who owned the land.
In 1851, gold was discovered in Australia. As a result, a rush to find riches came, bringing thousands of new immigrants to the country. By 1859 six separate colonies existed, and in 1901 these colonies joined to form the Federation of Australia.
From 1914 to 1918, more than 400,000 Australians volunteered in World War I. Although Australia’s first major campaign in Gallipoli in 1915 was a failure, with almost 9,000 Australian soldiers losing their lives, its commemoration became an essential element in the emergence of Australian national identity.
Over the past 50 years, Australia has developed a highly diversified economy with considerable strengths, particularly in the mining and agricultural sectors and manufacturing and services, and it has become increasingly economically integrated with the countries of East Asia.

Australia’s climate is generally delightful and mild. Most of the country receives more than 3,000 hours of sunshine a year!
Being the biggest continent, Australia is characterized by various weather conditions, depending on its latitude. When it’s winter in Europe and Latin America, it’s summer south of the equator.
There are four seasons across most of Australia, with the tropical north experiencing a wet and dry season. Summer runs from December to March (average temperature 29°C), autumn throughout March to May, winter runs from June to August (average 13°C), and spring from September to November.

Australia is one of the largest countries on Earth and the only country that covers an entire continent. Although it is rich in natural resources and has much fertile land, more than one-third of Australia is desert.
In most Australian cities and farms locating in the southwest and southeast areas, the climate is comfortable. The famous outback (remote rural regions) contains the country’s largest deserts, where there are scorching temperatures, little water, and almost no vegetation. In the northeast, there are dense rainforests where lush vegetation grows.
Running around the eastern and south-eastern edge of Australia is the Great Dividing Range. This 3,700-kilometre stretch of mountain sends water down into Australia’s most important rivers and the Great Artesian Basin, the world’s largest groundwater source.

The politics of Australia take place within the framework of a federal parliamentary constitutional monarchy. Australia has maintained a stable liberal democratic political system under its Constitution, one of the world’s oldest, since Federation in 1901. Australia is the world’s sixth oldest continuous democracy and largely operates as a two-party system in which voting is compulsory. The Economist Intelligence Unit rated Australia a “full democracy” in 2021. Australia is also a federation, where power is divided between the federal government and the states and territories.

In turbulent times, the Australian economy benefits from rock-solid foundations.

Prior to 2020, the economy experienced just two years of negative growth during the previous six decades. And since the last recession in 1991, our growth rate has averaged 3.2 per cent, which is higher than every other major developed economy in the world.

Australia’s trade links with near neighbours are a major factor. The Asia region is ultra-fast growing, and Australia’s network of 14 free trade agreements across Asia and the Pacific have helped agile Australian businesses to rapidly expand.

While over 80 per cent of Australia’s economy is services-based, global leadership in several key industries powers our exports. Asian markets are hungry for Australian minerals and energy. Our agricultural industry is highly efficient, and our clean, green produce fetches premium prices in Asian markets.

Underpinning everything is our sound financial system, strong fiscal position and low government debt. This permits strategic investment in future industries and infrastructure.

The Australian Taxation Office (ATO) is the principal revenue collection agency of the Australian Government.
The role of ATO is to effectively manage and shape the tax and superannuation systems that support and fund services for Australians, including:

Australia works closely with other countries to promote security and stability in the immediate region and globally.

HMAS Newcastle (Department of Defence)
Australia’s response to security challenges, such as the proliferation of weapons of mass destruction, terrorism, cyber threats, maritime security, and weak and failing states, is multi-dimensional, with many areas of government playing a role.
A versatile and modern defense force, solid bilateral links, and an ongoing commitment to a rules-based global order and the United Nations are crucial elements of Australia’s approach.
Bilaterally, the alliance with the United States remains vital. Long-term links with New Zealand and growing ties with Indonesia, Japan, and the Republic of Korea are valued in pursuing common strategic interests.

Regionally and multilaterally, Australia continues to work with others to address traditional and non-traditional security issues. Australia is a significant non-NATO contributor to the NATO-led International Security Assistance Force in Afghanistan and recently announced further financial assistance to help develop Afghanistan’s security forces.
Australia will continue to contribute to Afghanistan’s security and stability post-2014. Australia is also a leader in global efforts for non-proliferation and disarmament, and counter-terrorism.

Peace and humanitarian missions
Since 1947, more than 65,000 Australians have served in more than 50 peace and security operations worldwide. In its neighborhood, Australia has helped build peace in regional missions in the Solomon Islands, Timor-Leste, and the Autonomous Region of Bougainville (Papua New Guinea).

As the nature of peace operations has evolved, so too has Australia’s contribution, with an increasing focus on policing and civilian components and on helping nations to build their capabilities and national institutions.
www.defence.gov.au
www.dfat.gov.au