Stumbling Through the Past
Delving into History…

Aboriginal people arrived in Australia about 50,000 years ago. It’s believed they traveled from Asia across land bridges that were exposed when sea levels were lower. The hardy Aborigines have learned to live in the harsh conditions of the outback. 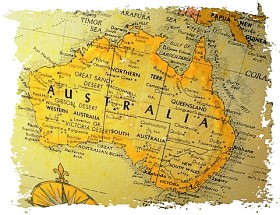 Dutch explorers first landed in Australia in 1606, and the British began to settle there in 1788. Many settlers were criminals sent to live in Australia as punishment. For a short time, the newcomers lived peacefully with the Aboriginal people. But soon, fighting broke out over who owned the land.

In 1851, gold was discovered in Australia. As a result, a rush to find riches came, bringing thousands of new immigrants to the country. By 1859 six separate colonies existed, and in 1901 these colonies joined to form the Federation of Australia.

From 1914 to 1918, more than 400,000 Australians volunteered in World War I. Although Australia’s first major campaign in Gallipoli in 1915 was a failure, with almost 9,000 Australian soldiers losing their lives, its commemoration became an essential element in the emergence of Australian national identity.

The signing of the 1919 Treaty of Versailles by the Prime Minister was the first time Australia had signed an international treaty. In World War II (1939–45), Australian troops were deployed against the Axis powers in Europe, North Africa, and the Middle East and allied with the United States in the Pacific War against Japan. On 1 November 1945, Australia became a founding member of the United Nations. In 1951, Australia entered into the ANZUS Treaty with the United States and New Zealand, and in 1957 signed an agreement on commerce with Japan which underpinned Australia’s increasing engagement with Asia.

Over the past 50 years, Australia has developed a highly diversified economy with considerable strengths, particularly in the mining and agricultural sectors and manufacturing and services, and it has become increasingly economically integrated with the countries of East Asia.

We Know Australia
We Know Migration Law
We Know You!

Reach out our expert today! Service you can trust, Experience you can count on.
Start your Enquiry