Donald Trump has cited Australia, Canada and NZ as examples as he rolled out an immigration plan that will include a points system to favour skilled workers. 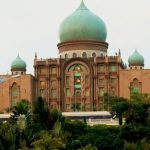